Before Falling With Grace was ever thought of as a blog it was going to be a magazine article. I was doing some research into the idea and stumbled upon many articles referencing Aikido. The more I read the more interesting the subject became to me. 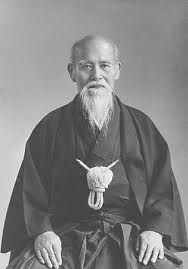 Morihei Ueshiba
Born in 1883 to a wealthy landowner, businessman and politician Morihei Ueshiba was considered weak, sickly and "bookish". His father tried to persuade his son to be active by suggesting sumo wrestling and swimming. His father would tell him grand stories about his great grandfather who was revered as a great samurai.
This same young boy would grow up to become a legend himself founding the martial art of Japanese Aikido. After many years of training in various martial arts and learning much from great masters his goal was to create an art that practitioners could use to defend themselves while also protecting their attacker from injury.
The first stage of Aikido is actually learning back rolls, forward rolls and break falls. Learning how to fall well is crucial. The next stage referred to as Ukemi translates to the art of falling.
While there are many elements to this art I found it enlightening that after intensive training the techniques actually require very little strength as the moves lead the attacker's momentum against himself. The energy redirects the force of the attack rather than opposing it head on.
After reading The Essence of Aikido Compiled by John Stevens I learned that Aikido is not only the practice of a martial art but a way of life. The book describes the spiritual teachings of Morihei Ueshiba and also includes his art work.
I've enjoyed reading stories about an 85 year old Ueshiba taking on much younger opponents. With what seems like a simple "Jedi" type swish of the hand (these are not the droids you are looking for) Ueshiba took down the brawniest of men. Ueshiba explained that it requires great mental training. You must develop the ability to relax the mind and body under the stress of dangerous situations.
I think it was far before I learned of the teachings of Ueshiba that I knew that it seemed like the more agitated our spirits get the less effective we become. What's worse is that we all seem to collide with each other when we're like that. Wouldn't it be great if we could just find some harmony in the chaos?
As soon as you concern yourself with the "good" and "bad" of your fellows, you create an opening in your heart for maliciousness to enter. Testing, competing with and criticizing others weaken and defeat you. - Moihei Ushiba
While I'm not sure my body is ready for break falls I know that I can benefit from the concepts of Aikido. It's not the action of the blow but the art of falling. 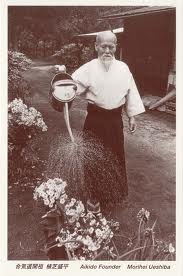 Another of my favorite Ueshiba quotes: Your heart is full of fertile seeds, waiting to sprout.
Posted by Amy Junod at 4:00 PM