This August I was thrilled to learn that Brené Brown had released a new book under the title Rising Strong. The Reckoning. The Rumble. The Revolution. "If we are brave enough, often enough, we will fall. This is a book about what it takes to get back up." 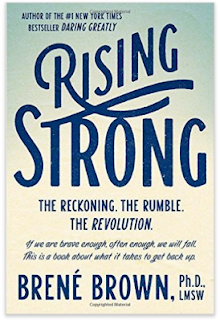 Being in constant search for great tips on falling gracefully, just the idea of this book thrilled me. I couldn't wait to get my hands on a copy.

I phoned my local Half Price Books because I really do love the idea of recycled books. I asked if there was a copy that had been turned in yet. The salesman checked and said that they didn't have any used copies but that they had new copies available. He added, "Books like those tend to not be resold until long after the release."

"Yes," I said, "Books like these are to be taken slowly- to think about an chew on a bit."

What a great compliment to any writer I'd have to say. And the "chew on it a bit" is a phrase that a southern gal like Brené Brown could appreciate.

So these last few months, I've been "chewing on it." As I've mentioned before, due to my Sjogren's Syndrome my dry eyes make it impossible to read so I often purchase the audio version of books I read. I am SO happy that I did because it was narrated by none other than Brené herself. There really is something extraordinary about the written word being brought to life by it's creator. There is an emphasis on each point that's really driven home. At least that's been my experience. I would highly recommend you doing the same.

In her first chapter, The Physics of Vulnerability, Brené provides the best reason for me to prescribe the book to you all.

"Rising Strong doesn't offer a solution or a recipe or step-by-step guidance. It presents a theory- grounded in data- that explains the basic social process men and women experience as they are working to rise after falling."

With her years of experience as a researcher Brené Brown can not only provides the facts by which we've taken our tumble but backs up her findings with her own life's rich story base.

I have to admit that as a self certified falling instructor I was a little uneasy about delving into weeks worth of data that concentrates on nasty spills. That was until I read this tidbit:

"People who don't stay down after the fall or are tripped are often trouble-makers. Hard to control. Which is the best kind of dangerous possible. They are the artists, innovators, and change makers."

There's lots of ways to view falling. One of them I didn't really put much of my own emphasis on but that is really a biggie is how vulnerable we all feel when we take a tumble. Ms. Brown provides an expansive view on this topic.

The book is packed with useful insights from other authors, leaders and spirituals. I found myself saying, "OOO- that's good." and "Oh, I do that."

An interesting thing happened as I was nearing the end of the book. I found myself seeing situations with a different lens. I was frustrated, antsy and unwilling to sit by and watch my dreams slip away.

There is a certain amount of loss/grief that occurs in waves when living with a chronic illness so at first I played this feeling off to those emotions. This feeling was entirely different though.

After a few weeks of setting the book aside, I grabbed it while running out the door to get some lab work done. While waiting my turn at the lab I flipped open the book to page 255.

"When emotion washes over us and the first thing we think is, Why am I so pissed? What's going on with me? or My gut says something's up and I need to get out my journal and figure this out, that's when the uprising has officially started."

I believe that I had started my own revolution with Me, Myself and I. We are mighty and strong and are not afraid to GET BACK UP!

"There is no greater threat to the critics and cynics and fearmongers than those of us who are willing to fall because we have learned to rise." 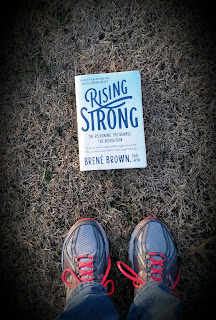