When A Cyclist Falls

Many of us can remember when we first learned how to ride a bike. In one of my first posts I wrote about David teaching my son how to ride his bike. In You Fall, I Fall, We All Fall Down I explained how David first taught my son how to fall before he even talked about balance. This worked brilliantly for my son and soon he was peddling on his own.

Cycling is a big sport in our town. David belongs to Plano Bicycle Association who has done a great deal to keep the sport safe, fun and competitive. The rides are split up into different levels of skill from novice to highly experienced riders.

For long distance cycling the riders have their feet clipped onto the peddles. For an experienced rider this carries no great risk but a new rider must learn to pull his foot from the peddle to avoid a crash. It's inevitable, when your learning everyone tips over once.

To hear the members speak of their own experiences of falling and then tipping the others over as well it sounds funny.  Here's a first person perspective of the infamous clipless pedal fail.

The ability to know one's own limit is probably one of the most important skill cyclists might overlook. While many set goals at a reasonable pace there are those that would like to compete at a higher level. When it becomes less about improving your own performance and more about the quest for winning at someone else's challenge things can spin out of control. 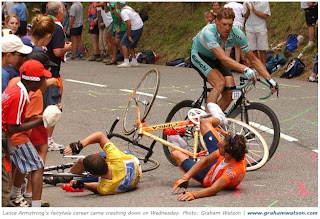 I've been interested to tune into Oprah's interview with Lance Armstrong which aired on the OWN Network this week.

Honestly, I wasn't shocked to learn of his use of banned substances. What did stun me was how many opportunities along the way that he had to come clean. As time progressed it seemed like he created a delusion of the impact of his own actions.

I can appreciate a person's right to achieve his or her greatest potential. To push yourself harder to reach a goal or milestone is human. To let it all go to our heads perhaps is where our faulty human genes sets us apart from the other creatures. To know when enough is enough, we still have a long way to go.
Posted by Amy Junod at 8:16 PM No comments:

One night this week Hubby and I went out to dinner at a local Greek restaurant down the street. It's going to be another crazy few weeks so we wanted to take some time to enjoy a nice, quiet meal and each other's company while we can.

As usual we were greeted warmly and sat in the dining room. We love Kosta's not only for the great food but also because of the cozy atmosphere. It's a great place to really enjoy your meal and actually hear the people you're seated with.

Over a glass of wine David and I replayed the events of the busy previous weeks. My sister had driven up with my niece, the "preen-cess." That gave us lots of material to replay for a laugh or two. Our conversation became muted once we started devouring our salads.

In our quiet I couldn't help but hear the discussion at the next table. While stuffing fork-fulls of romaine in my mouth I became so excited. Gasp. They were talking about Revenge. Not just the act of it but ABC's hit television show Revenge.

I leaned in to tell David, "Psst. They're talking about Revenge."

He nodded knowing this is one of my favorite shows.

I reported to David, "She's explaining the show to that other couple perfectly. She's right. At first it was all about avenging her father's death but now it's a whole level deeper."

David looked at me and blinked. He clearly didn't share my passion for the show but smiled. He smiled like a parent does when catching a child watching Sesame Street. How sweet.

The woman continued to recount the previous season, "Well, she's killed off almost everyone involved. We weren't sure where they were going to go with the series this season."
"Oh, yes?", the other woman said.
"Yes. It's been taken into a whole other direction. It's been quite interesting actually." the woman explained.
One man from the table inquired, "Now, this is the show that takes place in the Hamptons?"

It was all I could do to keep from squealing, "Yes! Emily Thorne's beach house is gorgeous!"

I didn't. I wanted to spin my chair around and bump myself in between the nice couple. I stopped myself.

I looked over at David and smiled sheepishly. I was just about to apologize for not paying attention when one of the men in the group started talking about Windows 8. The couple was excited to upgrade to it but was still unsure. David almost dropped his fork. Suddenly he was eavesdropping in the adjacent table's conversation too.

"I wish I could tell them how great it is", David leaned in to whisper to me.

"They sound like such interesting people. We should say something. They're fun." I prodded.

It was fun. It was big people conversation. They made watching TV sound like an intelligent use of one's time. To them Revenge was a poignant peak into the life of the rich and famous. A brilliant weaving of revenge and regret. Windows 8 is kinda cool too.

Every now and then something happens, maybe something small, a thread the weaves through fabric of our lives and lets us all know we are connected.  Me and Revenge, David and his Windows 8 and the table next to us that provided the bond between our two interests.

Then the waiter came to ask us if we would like to order dessert. Cheesecake. 2 spoons please. That's one interest we always seem to share.