It always seems like when I think I've got everything under control something happens that throws everything into a whirl. Sometimes I feel like my life is slapped onto a potter's wheel but instead of being molded, sculpted it's left alone and spins around all floppy. Tiny chunks of my life's messy mud is flung around, clinging helplessly to any porous surface that will support it.

While most times I seem to manage to clump my life back together again there always seems to be a piece missing. It's not the chunk that my kitten batted under the fridge either. I've accounted for that piece but what's happened to the rest of it?

This last week was probably the first time that I gave a good long stare down at my Sjogrens Sydrome. Instead of the recon like scouting I've done previously, I really took a realistic examination of my new opponent. Life is complicated enough without this throwing more mess into the mix. After careful observation I think I've found where my missing chunks of life have gone.

With each "flare" I have realized that I come out of it with a bit more apprehension. I'm not as quick to throw on my apron and whip up a batch of cookies. I've found that I'm almost never a morning person anymore. I miss making big breakfasts on the weekend. When I say yes to an invitation I try real hard to squash the whispers of fear that I might not feel well enough to make it. I'm not the cheerleader on the sideline anymore that can shout out rah rahs for my loved ones' endeavors.

Those might seem like silly things but to me those chunks weren't just pieces...they were "peaces". They were little moments of peace amongst the chaos that family life is. I miss those parts of me that I've set aside from the lump.

The hardest part for me is never really knowing when the potter's wheel is going to be turned on. I rather like the idea that I'm being molded into something new every day so I don't resist being a lump of clay. I just resent the fact that Sjogrens gets to keep it's foot on the peddle. Just when I think I'm steady I begin whirling around again. This latest "flare" has me dizzy, let me tell you.


This afternoon I'm trying to find the chunks again:
So now I'm pretty much back together. I'm realizing that people pay good money for this kind of dizzy. I should just be still, kind to my body while it rebounds. I know there are some things left undone and that's ok too. And you know what? That chunk of me that the kitten bopped under the fridge... I can do without. That was the part that was crazy enough to care how clean the underside of my fridge was!

We Can Get Through This Together

It's been one of those crazy, hectic weeks. As I've mentioned before, I've made my peace with Spring so we're good, Spring and I. This time of year is just crazy though. Have you noticed how much gets crammed into 2 months?

Since making my peace with Spring I've really taken the time to stop and try to figure out what the heck is going on in the weeks of April and May. I used to just think it was my issues with the tail end of my friend's days. Now I'm really beginning to think it's not just me.

First, there is the "End of School Year" stress. If you're a teacher, you're trying to stuff as much knowledge into your students' craniums as the state regulations will allow.
If you're a parent, you're trying to keep up with the stacks of papers notifying you of reports due, special programs and your kids' next year's curriculum. Oh, and the Cranial Factual Data Compression Consent Form. Hey, where is that one? Darn it...they even printed that one on canary yellow.
Anyway, if you're the student, it's the "Holy Crap" moment of the academic year when you realize that the spring time slacking has savaged your grades.
Up goes the stress...Mom's screaming for some yellow form...teachers remind you of how they tried to warn you. AHHHHHHH!

My second thought was that it's just a hard time to balance work and play. With the warmer months there are always house chores that have been put off until Spring. Here in Texas we start warming up in March but it can wain back and forth until the end of April. There is about a week until it starts to really heat up. Throw in some stormy weather like we had last night and your clean up efforts are tripled.

Maybe the stress is due to allergies? After having another bad bout with allergies I was wondering how many people are doped up on Benadryl. It's hard to get anything done with a tissue clenched in each hand. It's just impossible to stay on track. (For some people, literally) When the "four hour relief" wears off and you sober up you realize you're four hours behind!

All that I know for sure is that we're all pinging off of each other on God's green Earth. The more agitated we get the harder it is to move around freely. I am deeply sorry to the Bubba that was riding my tail this morning. I cannot risk a speeding ticket...my son's summer camp fee is due. Just because you're rushing back to school to drop off your yellow CFDCC form doesn't mean you get to drive the rest of us off the road. Besides, it's not that form that's due today...it's your taxes.
Posted by Amy Junod at 9:17 AM No comments: 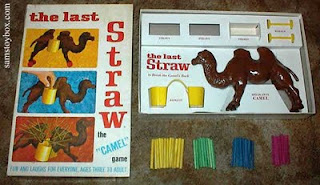 Remember this game? When I started writing this blog entry I remembered having this game. The game itself is pretty simple. Each player takes a straw and places it in the basket on the camel's back. The one who puts in the last straw that breaks the camel's back is the loser.
What is your last straw? When do you know when you've reached your limit? As kids we knew when my Dad was at his limit of parental patience. He would just stand at the top of the stairs and pat his head with both hands. He'd shake his head while doing the patting...maybe as if he was shaking off the last fragment of patience before blowing his top? This was not a good sign. In all accounts, this meant the Junod kids had pushed Dad beyond the limit. Surprisingly, there was never any yelling involved with the head patting. In the silence of Dad's maniacal head patting we would all look at each other with distress. It didn't matter who might have started the incident, we all were in it from there out. It usually moved us into action, the very action that was probably requested of us in the first place.
I've referred to how my "last straw" looks. I hold onto stuff inside until I spew like a summer time water toy. My "tell" is when I tug down hard on my face with my hands. With my fingers bearing down on my cheek bones I tug down on my bottom eyelids. There's usually some groaning happening...my eyes wide with fury. This is where Nice Amy splinters into her other self and she begins talking in latin. Oh, no...it's not that bad. Although I have no idea the words I say, they must be motivating.
Have you ever encountered someone who's response to a situation is totally blown out of proportion and inappropriate to the problem? The truth is that it's probably not that one situation that has made the person irate. It's probably the fact that so many "straws" were put in the bucket that the person was carrying. That one tiny incident was the final straw.
You never know what kind of heavy load someone is carrying. In a world where we seldom take the time to really listen to what's going on in a person's life it's hard to tell. Sometimes people have carried the load so long that it just looks like the ordinary burden. The person has shifted the weight around so that you can't see the weight of it all. It's there though...ready to break free from under the pressure. Just one straw is all it takes.
My wish is that you have a light load of straws to carry today. If you see someone who's struggling with too many straws, offer to take on a few of them. If we all distribute the weight it's an easier load to carry.
Posted by Amy Junod at 8:48 PM 1 comment: