Life with Sjogren's Syndrome has made me less rapid firing with my acceptance of any commitment. Just because I have an auto-immune disease doesn't mean that I can't still find joy. I just have to turn my limitations into alterations. I wanted this. I wanted it bad.

Not unlike the mental toughness and physical excellence that Olympic Athletes must posses, I too felt as though I won the gold this past week. Not only did I survive "Ohn Mamie's Bug Camp" but I think I nailed the landing.

After a week of hair braiding (with dozens, no DOZENS of hair bands), PlayDoh crafts, trips to local libraries, swimming, gardening, more crafts, baking and cat taming, I believe the judges would sympathize and give me gold. 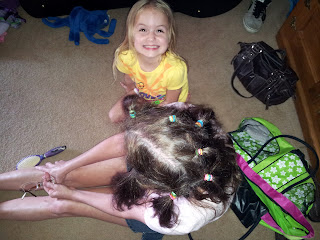 I prepared. I did. I stored my body's energy for the big show. My body needed to be at it's peak performance level and I didn't chance an injury on anything frivolous.

After a week of fun visiting the family my sister dropped my niece off. She delivered her along with enough work books, PlayDoh, naked barbies, costume wigs and props to rival any off Broadway show. (Off, off Broadway) 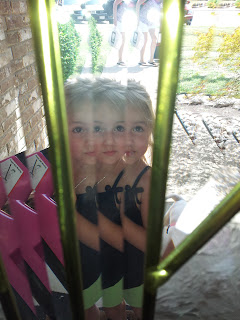 My plan was to wow the judges with a stellar routine that could be tweaked if needed to accommodate any ailment from a rigorous event. (Downtime needed daily to off set Sjogren's symptoms)

Just like the athletes that compete in the Olympics, I had my team of handlers. Bug handlers you might call them. They all rose to the challenge. The time change was a bit difficult for them to snap back from. Four year olds run on a whole different time table. Failure to yield to the current time could be catastrophic.

As Olympic athletes get drilled by reporters I too was pummeled with question after question. Why, why and more why. Never once did I muster a "because I said so!". Instead I tried my best to come up  with an answer that would not spawn another followup question.


Shopping with Bug...she calls this "coasting".

After all of the strenuous preparation and week's worth of body and patience crushing competition I can honestly say that I am proud of my performance. I went out there, gave it my best with somewhat fearless ambition and nailed it.

All of the preparation. All of the effort and it was all over with in a flash. I packed up my niece with fresh baked cookies, a little caterpillar burrowed safely under dirt in a plastic corn puff container, baby basil plants and her off Broadway gear. 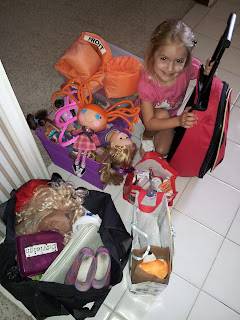 Some people measure their success in gold. My gold was hearing my niece say, "I had so much fun at my first ever Ohn Mamie Bug Camp." This implies that there will be another.