From Tiger Cub to Eagle

In the fall of 2001 I was driving my son through the carpool at school. We drove past an entire camp site arranged on the school's front lawn complete with pitched tent, fake campfire, fishing rods and a man sitting by the "fire."

My son smashed his face and hands against the window and declared, "I want to do THAT!"

The display was the cub scout pack's way of inviting new members to join their pack. There were signs inviting students to join them at their next pack meeting.

My son couldn't wait. We went to the meeting and my son was hooked. He joined as a Tiger Cub and was so proud to wear his uniform. He was ready for the next meeting which would begin with the year's guided programs.

The next week our country experienced our 9/11 attacks. The leaders of the pack decided to go ahead with the planned pack meeting as it was good for the boys to retain some order.

We all gathered solemnly in the school. It was the right decision to meet and even though we were all still stunned by the tragedy of attacks, it was clear that it was good for the boys to have some normalcy.

In the opening of the meeting, the Cub Master addressed the group. Speaking to both the parents and the scouts, he explained that the tragic events that had unfolded made the skills scouting will teach the boys that much more important.

He went on to explain that the programs teach scouts to be self reliant, strong leaders of the community that will know just what to do in a crisis. They would learn skills that will help them survive. The boys will learn emergency first aid so that they can help themselves and others in a crisis situation. As scouts they would be part of the solution to a catastrophe because they would know what to do.

I am thankful for all that scouting has taught my son since those first few lessons all the way through his journey to become an Eagle Scout.

It is with great pride to announce that my son has been awarded the highest rank in Boy Scouts of America, Eagle Rank. 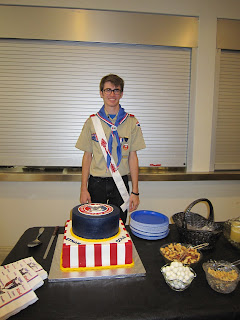 My son Cole shared his Eagle Court of Honor with his old friend Ethan, which made it even more special.

Preparing for the Court of Honor, I was digging out memento items to share with guests at the ceremony. We shared some of his favorite things...and not so favorite. Not so favorite would be the rather picassoesque basket he wove for his basketry merit badge.

It brought back fond memories of being a Den Leader and David as Scoutmaster. For myself, it was very rewarding to be a Room Mom in class and overhear a scout say, "Hey, I learned about this at my last den meeting!"

As the teacher looked at me for confirmation, I nodded and smiled, "Yes. Yes you did."

Boy Scouts is still a great organization that I am proud to have been a part of for so many years. It's taken a few hits here and there and it seems like there are controversies popping up with each year. It's evolving just as our nation is.

The Scouting Program is designed to fit so many faiths, cultures and physical challenges. There is a group out there for everyone and I encourage those to find the best fit for their son.

I'm adding a copy of the movie that my Aunt Janet created that shows some of his journey from Cub Scouts through Boy Scouts. It's a beautiful way to honor Cole's achievements and journey to reaching the rank if Eagle.