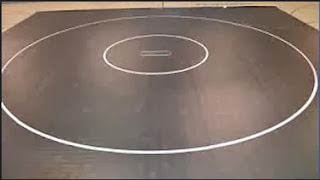 It's been a rough couple of months trying to work through what seem to be multiple flares from Sjogren's Syndrome. It's got me down.

I'm down on the mat and Sjogren's has me in a choke hold. I'm waiting for the ref to call it. He'll grab Sjogren's hand, raise it high in the air and declare it the winner.

The plastic mat smells funny but I don't care. With my face smashed against the stinky hard mat, I will play dead until they bring over a stretcher or something.

I'm toast. Done. Surely someone will notice me all sprawled out on the mat, right?

As I pull myself to my feet, I'm glad that my eyes can't focus well enough to see the smug smile on Sjogren's face.

What? Wait, there's another round? Are you kidding me?

In one swift swoop I'm flipped over onto my back and my shoulders are pinned down. At least this time my face isn't planted on that stinky mat.

Sjogren's won again. I'm not even sure those moves were legal.

Once again I manage to sustain my footing but this time I'm going to take the fall myself. I'm beginning to see the honor in those crazy WWE dramatic falls. I'm not too proud to take myself out of this round as long as it avoids another body slam. Let me just contort my body and do my own twisty flip thingy onto the stinky mat.

As I turn to face my opponent I am suddenly keenly aware that I am ill prepared to even be in a ring. I haven't trained for this. How did I get into this position and why am I just now learning how comfy wrestling shoes are?

As Sjogren's take hold of me I twist this way and that. I try to pull off one of those cool turns I've seen on Dancing With the Stars. As I break free I jerk myself backward and down on the ground. I don't even care if it was a graceful fall or not. At least I'm down on my own terms.

As I open my eyes I see a gurney being hurried to my side. My limp body is flopped upon the gurney and I am whisked out of the arena. I'm deposited in a locker room with other embattled athletes.

I had no idea that there were so many of us. Had we known about one another sooner could we have trained together? Maybe if we had a chance to confer with each other we would learn of our opponent's weakness and taken it down. At the very least we could insist on wiping down those mats with Lysol.

My previous battle had crushed my will to fight. I hated taking a fall. My inner spirit was screaming to fight like a badger but my body was spent. Being pinned down by chronic illness was changing my own perspective and I didn't like it.

Knowing that I'm not the only one wrestling with the myriad of body flattening symptoms makes me proud to take to my feet again.

That's why I'm not going to take another fake fall. Why should I let Sjogren's win without a decent fight? If it knew that we all have decided to fight like badgers maybe we could turn the crowd and refs to our favor? Maybe the refs will finally see some of those illegal moves and Sjogren's would be disqualified from competing all together.

My wrestling shoes are hung up for now but I'm heading back to the arena to cheer on my fellow athletes.
Fight! Be brave! And don't you look awesome you badger you!