If it's been a while since my last post, you'll have to forgive me. I was out...shhh...having FUN!

A couple of weeks ago I tagged along with David to San Francisco to hang out with him while he attended VMWare's 2013 Defy Convention. While he attended seminars and workshops during the day, I could hang out in the hotel room and relax.

I am so glad that my previous "what ifs" were met with "so whats" when I suggested that maybe I wouldn't feel well enough to travel.

"If you have a flare then you can just relax in a nice, quiet hotel room and just concentrate on taking care of yourself." David said.

He was right. It was a blast. Besides Hawaii, I think California draws me in and swoops me under it's wing like no other place. San Fran just has a spirit that is unique and vibrant.

We stayed at Wyndham's Parc 55 which is located in Union Square, perfectly located near the cable car station. When we checked in we had plenty of time to freshen up and then hop on a cable car and head to the pier. 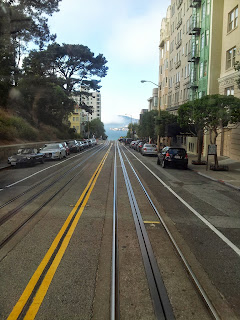 Seriously, I could just ride the cable cars all day and I'd be happy. The clickety clack of the gears, the dings of the bell at every stop, the commotion of people hopping on and off and the sights along the way is just child like fun.

If you're thinking that I will tie in my falling with grace theme into cable car riding, you're wrong. I'm happy to announce that I did not take a tumble off of the famed trolleys, as I was previously terrified that I would.

First, there would be much fun exploring as much as we could between workshops and naps.

One night we ate at one of San Fran's oldest steak restaurants, John's Grill. When the waitress placed this beautiful plate in front of David,  I would swear I heard a slight whimper. 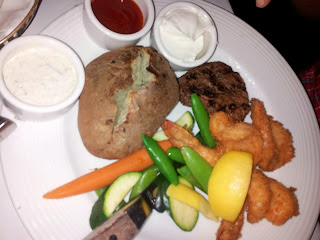 He had ordered the surf and turf platter which was a combination of sirloin and shrimp.

David looked at his plate and whimpered, "It looks like a little meat medallion."
I couldn't help but let out a cackle as the waitress explained that the menu did say "petite" sirloin. Thank God for the sour dough bread.

Did I mention that they hand out samples at the Ghiradelli Chocolate Factory? And if you stand on the street you can position yourself to stand right between the chocolate factory and the Boudin Sour Dough Bakery. It's like standing under an air duct from Heaven. Really.

We decided on one day that we would take a tour bus through the city so that we could take in as many sights as we felt up to. The tours are a great deal as you can hop on and off as many times as you like. With buses arriving every 30 minutes you can really experience a lot.

I didn't want to temp fate so we stayed on the bus for most of the tour. The highlight was riding on the top layer of a double decker bus while crossing on the Golden Gate Bridge. 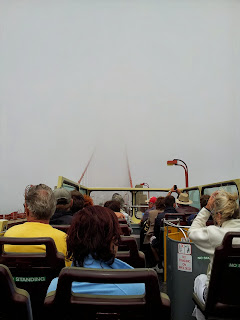 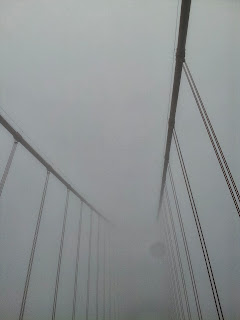 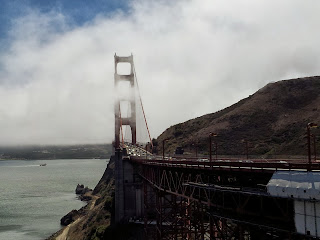 While waiting for the fog to burn off we hung around Golden State Park North for a while. 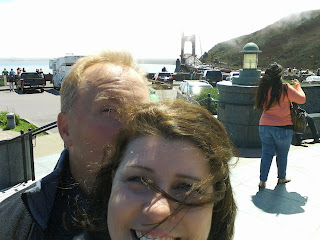 Well...we decided that we could hop on a separate bus that would take us down to Sausalito. We would just need to stand and wait for our bus's arrival.

It was windy and I had watched this poor bike riding lady's hat get blown off of her head three times in a row. It being very windy, the hat would twirl around and around on Golden Gate Park's heavy pavement. I jumped to her aid to retrieve her hat.

That's when a gust of wind thrust me into the same vortex the hat was twirling in. I felt like I was Alice in Wonderland spinning and spinning all the while holding on to Bike Lady's hat. After the second spin I thought that David would have grabbed me for a little assistance. It didn't come so off I went into my third and most graceful spin.

By then, Bike Lady was reaching out for her hat as I apparently had my arm outstretched to hand it to her.

The Golden Gate Park's brisk wind pulled me back to an up right position and all was well. No clapping. No waiting for the judges's scores. Just the knowledge that I did indeed fall gracefully by the Golden Gate Bridge.

David explained that he didn't come to my aid because I merely looked like I was doing pirouette. Maybe after watching a week's worth of street performers he thought I was just putting on a little show.

Nothing was bruised, not even my ego as I suppose it was a stunning example of how to fall with grace. We were off to our next stop, Sausalito. 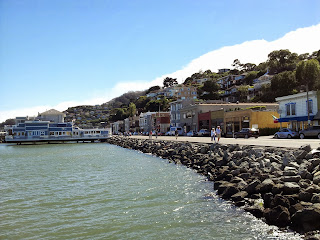 Giant's Stadium was turned into a gigantic carnival with free midway games, rides and to top the night off, a performance by Imagine Dragons and Train!

As I stood there with stuffed animals tucked under each arm, a churro in my left hand and a glass of chardonnay in my right, I was so glad that I tagged along.

To top off this Falling With Grace post, I'll add this bit of foolish play: 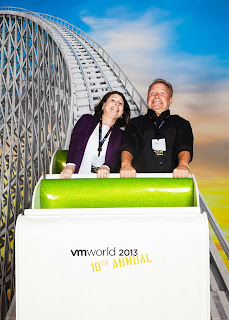 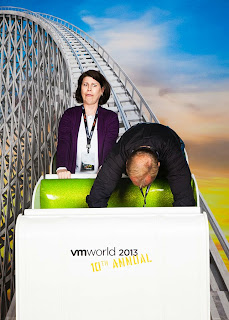 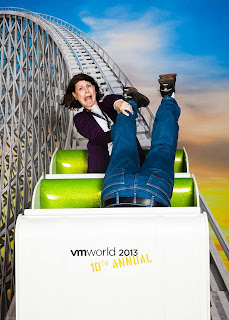 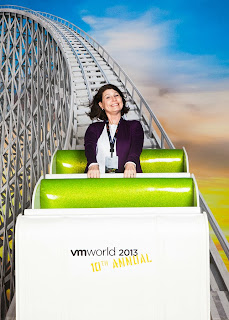 I'm off now to find a piece of stray Ghiradelli chocolate that MUST be in the bottom of my carry on.