As a deadline for another writing project looms near I have had to impose a blogger time out. I'm still figuring out the balance between life, writing and stupid Sjogrens symptoms that make it impossible to peck out words. While the procrastination many times boosts my creative energy I can't count on my eyes and hands to keep up.
Irene is making it impossible though. The reports from Hurricane Irene have been luring ideas of Falling With Grace themes. I do not take the whole situation lightly as I have family and friends on the East Coast. While I appreciate the weather reports I just hate how the reporters flock to get the best shots of them bracing against the wrath of Mother Nature. Sometimes it's like watching an SNL skit.
So I watch. I've been switching channels back and forth. For the most part I have been watching The Weather Channel. One reporter, Eric Fisher is reporting from Virginia Beach, Va. and has had quite a day. Poor guy. While being pounded by high winds, falling debris and skin braising rain he's held his ground.
My son and I were watching while he explained that there were still people not heeding the warnings of officials. As the report went on there were more and more people walking around to get into camera view.
"I'm just at a loss for words actually." he said. "I really don't think that we should be showing this because it's sending a bad example. I'm depressed right now."
I admit that my son and I laughed. Needless to say the spot was cut short. There were roars of laughter from the newsroom.
It wasn't until I tried to find the clip on YouTube that I discovered that one of the kids romping by the reporter mooned the camera. Poor Eric.
To be honest watching the people in Virginia Beach I can't believe the lack of better judgement. In my sister's town of Lake Charles, LA officials do it right. They make it very clear that if you're found out and about during a mandatory evacuation you will ride the storm out in the county jail. It will be hot and uncomfortable. Some tested it in last year's storms and I'm guessing they won't be around this year.
I won't give the idiots in Va. any more time than they will no doubt be getting. Instead I thought this was cute:
Prayers are with everyone dealing with this storm. I'm back to blogger time out until I get my project done.
Posted by Amy Junod at 3:48 PM No comments:

I'm sharing this with you all today because I thought it was a nice message to pass on. To be honest I do take a considerable amount of time picking out my coffee mug for the day. I have many. (I was told to "purge" one since I added to my supply when I bought a mug from The Shed)
I have my "Duty Mug" which is huge, from Bubba Gump Shrimp. I have a set of pretty flowered cups that my Mom brought over thinking it would make our garage sale more fun. My Louisiana cup comes in handy when I'm missing my sis and her little Bug. My San Francisco cup is used on days when I need to be reminded that I can accomplish anything. I like my frog mug because it just feels great to hold in my hands...and... it's a frog. Great days are created by having a frog smile at you at the break of dawn.

Click "Life is like Coffee" to watch the video clip:
Life is like Coffee Movie: Do you know people that just seem to be happier in general? Do you say to yourself, "I want to be more like them"? Often, the happiest people in the world don’t have the best of everything...they just make the best of everything!
Posted by Amy Junod at 3:53 PM No comments: 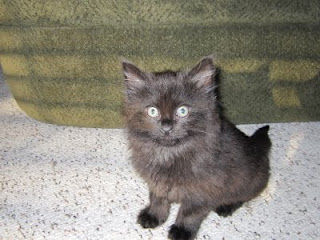 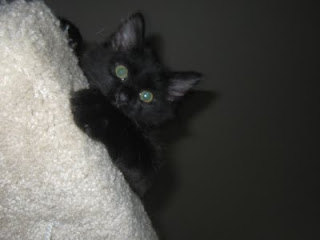 I woke up this morning and it looked like a mini twister had blown through the house. As I was straightening wall hangings and picking up shreds of paper I could only fear for what Christmas will be like. Her nickname this morning was Lucafina. Yes, spawn of Lucifer.
Perhaps I'm being a little harsh. She is quite cuddly and if you pick her up she goes limp like a rag doll. She loves to be held on her back and rocked like a baby. She's ever so demure.
After catching myself picking up all of her little toys so that Roomba won't suck them up I realized that the boys are right. She's spoiled. The other cats know it and resent it.
Our older cat growls at Bridget and reminds me of Maude. How many times does she need to growl that she doesn't need a new friend? Just leave her alone.
Our now middle cat is upset. She used to be the ninja kitty that we all laughed at. Poor middle kids. She used to be the one to torment. Now she's the one who can't sleep for looking over her shoulder constantly for an ambush. She's even put on .35 lbs. This upsets her.
Now days it sounds like a jungle. Growling, hissing, snorting...and all the while Bridget keeps up. It's worse around my writing desk where I now know better than to leave bare, exposed toes. "Why can't you just let Mommy finish these two last lines?!"
Sigh.
Perhaps I didn't really think this thing through. What I was thinking doesn't really matter. The truth is that when Mommy needs to close her dry eyes everyone cuddles civilly. When I grab my Snuggie the girls know that Mom needs some quite time and they all comply.
Posted by Amy Junod at 9:26 AM 2 comments:

It's been a little over a week now since my old Thespian Troop from high school gathered for a reunion. What started out as Facebook Group Page turned into posts about getting together. Then there was a suggestion of a date...another brave soul offered up her house for said occasion. We soon learned that we all would be lucky enough to take a tour of our old school to view the new Theatre wing the district added. Another member threw caution to the wind and offered her home up for a pre-reunion mixer for the night before.

Having a week to absorb the experience you'd think that I'd be able to jot down a few lines about what it meant to see everyone again. For lack of better words it simply felt like going home to see family. Walking onto our old stage felt like walking from the front porch into my old living room. As members would wander into the stage area one by one it was like recognizing old family members in a crowd of strangers.

It wasn't until we all were together again on that stage with all of our memories spilling out into the warm stage lighting that I realized how profoundly our lives were changed years ago. We were the lucky ones. We had the extraordinary opportunity to have someone believe in us enough to expect the very best.

I believe that with every production we were driven to push through our own perceptions and our eyes were opened to what could be. The results of one person telling you can do something are astonishing. As Mr. Lytle believed in each one of us, we had to rely on each other. No one wanted to be the weak link and we supported each other to be better. Just like a family.

So it's really of no surprise that so many years later we would all gather as adults and stand in wonderment of it all. Looking back we were really lucky kids. Now as adults the lessons taught in Room 501 and on that beautiful wooden stage are just as important today.

Don't upstage.
Project.
Have a motivation for each move.
Don't drop your lines.
Check your props.
Never turn your back to the audience.

Add your own favorite "Lytleisms" in the comments area gang...I know I've left a few rules out!
Posted by Amy Junod at 9:26 PM 2 comments: