Can We Keep It?

One of the things that I love about Hubby is that he can't stand to see an animal suffer. He especially loves the baby animals. So when the boys find "something" to rescue, it's usually brought in by Hubby to nurse back to health. The trick is to have rehab done before the patient is given a name.
One year we nursed baby possums. The boys found the little ones walking out of their den hole. They put them back into the hole but the next day they were at our doorstep. We knew something was wrong when they were out by themselves in daylight. Our Jamaican neighbor had trapped their "Mom" thinking it was a giant rat. He had never seen a possum before. Anyway, Ozzie and Harriet were with us until they were big enough to catch bugs on their own. We released Ozzie and Harriet at a nature preserve and they took off digging to make their new home. Pretty cool.
This year's rescue was an actual domesticated species. It was the cutest black ball of fur. One of our sons found it down in a drainage hole and couldn't get out. He figured he must have fallen through the grate. Our son's friends wanted to keep going but he told them he wasn't going to just leave it.
Hubby got a phone call. "Dad! Bring a screwdriver and the gloves!"
It wasn't long before I could hear "Meee! Meeee!" It was a tiny black kitten with beautiful blue eyes. Hubby gave it a warm bath.When it was wrapped up in a towel it immediately started to purr.
This is where the rehabbing of an animal becomes tricky for the seasoned parent. This is where the seasoned parent must establish the fact that we are just "fostering" the animal. It's not for keeps that we're taking care of it.
Darn it! The little guy was just the cutest little ball of black fur. He looked up with his sweet blue eyes and squeaked out a feeble, "Meep!" Then he patted my face with both of his paws, lovey like.
I had to shake it off. "Shake the cuteness off!" I snapped to myself.
"Drop the cute act buddy...you're not stayin' here," I said to him as he nibbled my hand. "Meep!" he squeaked. .
The next 2 weeks we took care of the little fella until we could find it a good home. My friend and her husband dropped by the house to deliver some Pampered Chef goods. Little did they know that they would fall under the little fella's cuteness spell. We told my friend about how he was rescued from a drainage hole. He began his pouncing play and purred loudly. They were hooked.
They left and were going to seriously consider coming back for the little guy. The next few days I kept sending  "feelers" out to see what the rest of the family's thoughts were about the kitten leaving. They all were happy that it was going to a loving home. That was the goal in the first place I convinced myself.
Another week passed and the little guy had gotten into the routine of the house. Our cats had even started teaching it their favorite naughty things to get in to. He had taken up napping space in the sunny spot under my writing desk...snuggled next to my feet. He was beginning to settle in.
I sent my friend a message to see if she was still interested. She told me she was...if I wasn't too attached. As the little guy was biting my toes I replied, "No."
So the morning came when he was getting picked up. I packed up his favorite toys and the box that we had him stay in until he could climb out. It was his "fort".
"This is his favorite toy", I said as I pulled out a purple mouse to show them.
"Here's the kitten chow, although he prefers the adult food better. And here's the kitten formula. He likes a little before bed and seems to help him sleep through the night."
Do those sound like the words of a seasoned rescue parent? No. No they do not. By the way, I had already started calling it names. Stupid names really...Little Bit, Squirt, Stinky Bean.
Thankfully, my friend named him Malcom...for the captain of Serenity. That is a perfect name for the little guy.
Yes...I fell in love with a rescue. It happened. I thought that I kept my guard up but somehow that fuzz ball got into my heart. Maybe next time before asking the rest of the family...I'm gonna ask myself..."Can we keep it?"
UPDATE:
Before publishing this post I got a ring from "the boys". They were on a mission to save the sibling of Malcolm. It had made a wrong turn in the underground tunnel drain system. It wouldn't come out of the hole for them. I pulled up and Hubby and son were hovering over the hole. I made the squeaky "meep" sound that Malcolm made. Out popped his sister's head."Meep!", she cried as she was climbing and trying to get out. Hubby's master rescue plan had worked. Hubby lifted up sissy in his rescue apparatus.
After a much needed bubble bath, a good night's sleep and some romping in the family room I'm looking down at it. I don't think there's any question this time. I've fallen for cuteness. 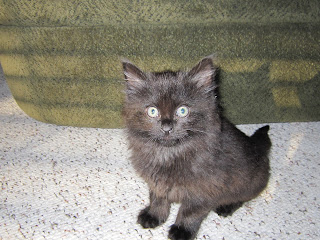