Making My Peace With Spring

For years I was in a sort of bitter battle with Spring. As the holidays were over I began to get that sinking feeling and before long I was at war. It took me many years to even realize that I was at odds with the season of what most view as the time of renewal.

I was a gal that liked routine. Renewal was a word that brought fearful thoughts. Spring forced me to learn about grief, face inner demons, confront fear and punted me out of routine. I hated Spring for what it took from me. I was pissed as hell at it and I think it knew.

Like many wars, my battle with Spring went on for quite a few years. Until a wise person pointed it out to me, I didn't even see it was a war. To me it was a nasty argument that had just gone on too long. Epic battles usually involve more than two parties. Not only was Spring involved, but Me, Myself and I.

I suppose that clinically my issues could have been described as a sort of seasonal depression. The truth was that until I confronted the causes of the triggers I was doomed to face that challenger every year. With each year and another win under it's belt, Spring was becoming a nasty opponent.

It only takes one battle fought hard and well to regain a little ground. Once I knew to look for the signs I began to plan my revolt. Such an awakening it was for me to stand tall against my bitter rival. For me, the first signal that battle was imminent was the humid seasonal weather we have in February and March. There is a sort of heaviness to the air and a musky smell in the air. As triggers go, this was a big one to recognize.

The battle line was gained and lost. I would charge forward only to retreat like hell. It wasn't until Spring administered it's crushing final blow, the death of my brother, that I just laid down my arms. Broken and defeated I stripped bare of all my armor.

I was fully expecting Spring to gloat. I was expecting it to taunt me and pick at me. Instead seeing me all sprawled out and defenseless, it offered me a lift up.

I opened my heart and eyes for the first time in so many years. I began to see the world in a whole different light. One by one my questions were answered by Spring. I planted a little herb garden and Spring responded with morning air filled with dill, rosemary and thyme.

I began to trust Spring. I became an academic of my own spirit. God gives us so many gifts and blessings each day if we would just open our eyes to receive them. One year I really enjoyed the discussions that Oprah did with author Eckhart Tolle on his book A New Earth. For the first time I had learned how to meditate. For someone who simply could not shut her mind off long enough to hear her own thoughts, this was a huge growth spurt.

I thought to myself how simple it is really. We make it all so difficult on ourselves. Meditation isn't any harder than getting enchanted by watching a baby sleep. Listening to a baby's soft, sweet breath is so peaceful. Before too long you realize you've been sitting there watching for an hour!

With each new year the garden kept growing. The next year I was finally diagnosed with Sjogren's Syndrome. This might have been seen as a blow from Spring but it was the answer to so many questions. (Why was I so tired? Why did my eyes feel like they were full of shards of glass? Why are my salivary glands the size of almonds again? Why can't I breath in spring humidity? Why was I so dizzy? Was I just lazy? Why couldn't I understand that simple flow chart? And my joints? What the heck is up with those?)

Last year I really looked forward to my annual play date with Spring. I stood in my garden taking in as much of that lovely fresh air that I could. My dill was really magnificent which attracted Black Swallowtails. I had many birds nesting so the sounds of Spring was just music. After the third morning of walking out the back door to find a bird eggshell I likened them to baby bird announcements.

Yesterday I walked outside with my coffee. Spring and I spent some quality time together. We welcomed the finches back for another year and we got to meet one of my "over wintering" Black Swallowtail butterflies. 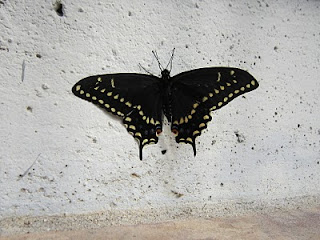 There we sat like the best of friends...Spring and I. Hello dear friend...I'm ready with open eyes, a graceful spirit and a grateful heart.
Posted by Amy Junod at 8:21 PM