What an odd expression of anger. I can't tell you how many times I heard my Grannie say that. I never thought of it much when I was a kid but it really is kind of silly, isn't it?

One of the last times I caught my grandmother saying that I told her to stop showing off. You see, I have a disease called Sjogren's Syndrome. One of the hallmark symptoms of Sjogren's is extreme dry mouth due to my auto immune system destroying my saliva glands.

She shrugged her shoulders and raised her hands as if to say, "Well, you got me kid."

The truth is that if we could just spit out our anger it would be so good for us. Holding on to angry thoughts not only is very taxing on our body but it just sucks any hope of happiness being part of our day.

I try, try and try again to remain in the present moment and not get my mind all caught up with the clutter that a bad day can attract. Angry thoughts are like the junk that clogs up the Roombas of our minds. Our minds can only suck up so much while under duress and angry. Negative stuff just binds up all the rollers. At some point you have to stop and clean out the tray, wash off the filter and untangle  those rollers.

I love a piece of artwork that Karen Salmansohn has included in her new book Instant Happy. She has drawn a picture of a woman who's head is spewing with clutter as if she's Medusa. Karen describes that ANGRY THOUGHTS MAKE YOUR MIND MESSY!

It's as if she was sitting across the table from me with ink to paper drawing me on one of my "bad" days. She had caught me on one of my own "I'm so mad I could spit" days. It's in black and white so without the green eyes I can't be for sure but it's pretty darn close!

For years I have grown to understand the power that positive affirmations and thoughts have on our well being and happiness. Until seeing the artwork in Instant Happy I didn't see that if you don't let go of the bitter stuff there will be no room for the good stuff.

I had been under the illusion that I could just drown out the negative- flushing away the bad. Sometimes we might need a total reboot to ensure that we are starting off fresh.

Start off with a clear head and you can see the beauty in this idea also created by Karen Salmansohn at notsalmon.com  - 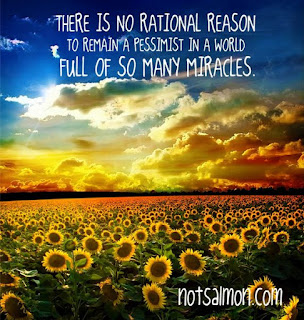 Last night David and I attended USA Film Festival's Oscar Night Experience. It's a fun night of glitz, glam and celebration of all things Oscar.

Each year the event is held at a local theater. In partnership with the Academy of Motion Picture Arts and Sciences, the Oscars are streamed live into the theater. We had awesome seats this year, down front and center. It was just like being there.

I love the Oscars. As written in my post Oscar Night, I have long dreamed of snagging one of those lovely golden statues. I don't ask how, I just know that I want one. And not one bought off of eBay either. I want to accept one of my own.

The long walk that a lucky recipient must take down the isle and then up those stairs must be like a floating dream.

This year when Jennifer Lawrence fell as she took to the steps everyone in the theater gasped. What a graceful fall.

The word grace itself is rooted from the Latin word gratia, grateful. One look at this stunning photo taken by Kevin Winter and you can't help but hear Jennifer's whisper of thanks.

Her dress draped gorgeously over the steps and lit from beneath you would swear she may be genuflecting.

Years ago I told David that all I wanted for Valentine's Day was the pair of Kiss Kiss bears that Hallmark was selling. Remember them? If you held their little snouts together they would "kiss" each other. 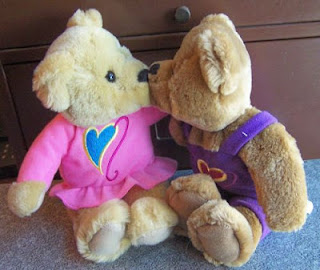 Valentine's Day came and these are the Kiss Kiss bears I received: 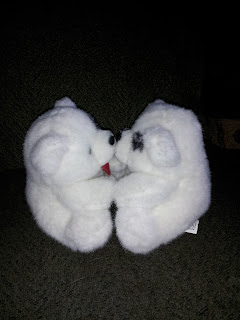 To be funny David had Sharpie'd designs around their eyes to look like the rock band Kiss. Their little mouths were stitched together with a needle and thread in a forever kiss. Needle and thread skills courtesy of the Marine Corps.

The next year's Valentine's Day he could be found in a Starbuck's gutting a stuffed animal, much to the horror of the woman at the next table.

When I was presented a little stuffed dog at the dinner table that night the stuffed dog started to play the theme song to my favorite soap opera One Life to Live.

I said, "How cool! An animal that plays the theme song!"

The song played again and again. I said I really wished I knew how to turn it off. He ripped into the freshly stitched sutures making me shriek. He then revealed a cell phone hidden inside the dog's belly  that was programmed with One Life to Live's theme as the ring tone.

I love this man dearly and it's not just for his stitchery skills. He's kind and funny. He's thoughtful and caring.

When I carry on long text conversations with my sister's dog Zoe, he gets it. He can't always understand what she writes because she writes with a speech impediment...but he gets it. To him there are all kinds of crazy out there and mine seems to suit him just fine.

Sometimes people think that there is some big method to crazy love. There's not really. It's just love. 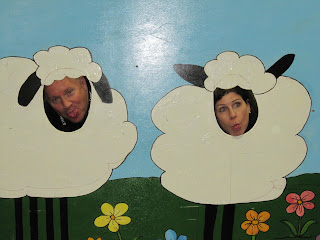 When I Grow Up

A lot of talk around the house these days has been about career and life plans. My son just finished his Eagle project and is working on his life plan essay. Hubby has been blessed with a new job opportunity which is a blend of years of experience. Stepson is in the process of training for the Navy's SWCC program.

So much discussion about knowledge, growth, dreams and life in general has given me time to reflect on my own experiences and dreams of the past.

When I was little I wanted to be an archaeologist. There was something intriguing about digging for treasures from the past. It seemed like life in a hands on history book, lying in waiting for someone to open. I wanted to be that person to open it, document it and reveal it's story to the world.


Today would have been the 100th birthday of Mary Leakey who was a trail blazing paleoanthropologist.
The young Mary Leakey had a love of archaeology and was allowed to participate in digs while traveling to France with her parents. Her passion for the science continued to influence her studies where she would audit university classes on archaeology and geology.

I wanted to be a Mary Leakey. Seeing today's Google Doodle of her made me see my old self's dream vision. (Alter the dalmatians for a sheepdog because I was really wanting a sheep dog like Ladadog in Please Don't Eat the Daisies back then.)

Aside from the dogs, that's me in that doodle. Looks like me. Looks like a content and happy me. It's made me wonder all day about how different my life would have been if I would have stuck to my younger self's life plan.

First, I would have learned the correct spelling of archaeologist.

Second, I would have ignored my mother's remark that it would involve more science than I was willing to choke down at the time. I would have pressed on that I wasn't swept up in the history and mystique aspect of the profession. It wasn't just about the wardrobe and awesome boots I'd be wearing. Awesome boots. Sigh.

Third, I would meet up with my sister who would have traveled the seas via a cruise line where she worked as a cruise director. Hey, if I'm making my younger self life plan work, I'm gonna make my sister's work too.

Dreams can make changes along the way to being realized. They can roll and tumble their way through life and morph into something we never could have imagined. I rather like how my life has turned out and I'm not sure I'd change a thing. And to be honest, I probably would've fallen into one of the big holes only to have my mother tell me she told me so. That's not worth the cool boots.