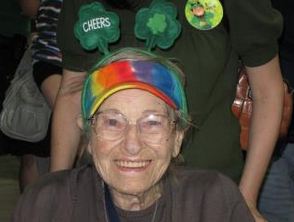 It seems fitting that Grannie and the GoGo Boots is my all time most read post. It's been a year since my grandmother passed away and I think she'd be pleased that her story is taking top billing.

I found out the icky way that sometimes when you follow a link back to a site that's referred to your blog it's not a good thing. It's a despicable practice that perverts do and it's upsetting because they target cancer blogs, grief support blogs. My grandmother probably would've said, "Don't they have anything better to do with their lives?" I think probably not.

There was a link to a homework page for an Honors English course. I found this kind of funny. Falling With Grace was under the category of new forms of writing such as blogs. I think Grannie would just love that other kids were reading the story and maybe getting something from it.

I loved my Grannie and her zest for life. During the last months of her life she would often comment about having regret about not traveling to Ireland.

My mother and aunt decided this year that they didn't want that same regret and agreed to go tour Ireland together. They left this week to fit in a toast to Grannie and to celebrate my mom's birthday.

Remember the story about how my grandmother left one weekend to drive to the very southern tip of Texas? She didn't tell anyone where she was going and it made my mom furious. Apples don't fall far from the tree.

This week after not hearing from my mother my sister and I were a little upset too. We figured that she was off having a great time and just not taking the time to at least let her daughters know she made it safe!

We posted funny pictures and comments on her Facebook page...


When day 5 arrived and there was still no word we were really worried. She didn't even check in to see how her precious cats were. This was just not like mom.

When did that happen? When did we become the worried ones and she became the one hooting it up from pub to pub? Hmph. I don't like this. I don't like it one bit.

We finally did hear from her. She was having cell phone issues and finding another phone was an issue.
"They don't have phones at the bed and breakfast?" I snapped back as if I might have heard that myself occasionally. My mom quickly changed the subject. I taught her that move.

I can't help but picture Grannie along for the ride over there. She'd be an awful back seat driver though.