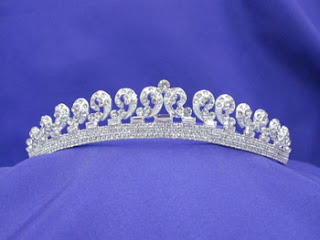 One day last week my preen-cess of a niece asked my sister if she would wear one of her preen-cess tiaras to work that day. To appease my niece my sister said yes. In the chaos that is shuffling little preen-cess to school and fighting traffic my sis had forgotten to take her tiara off. She strolled past heavy glances on her way into work and it wasn't until someone complimented her pretty tiara that she even remembered it was on.

That's her story about how the tiara wearing came about. My brother would wager that on some unconscious level she really wanted to wear her tiara all day. And why not? Why not wear something that makes you feel special and confident?

I've been scouring the internet this week looking for clear concise evidence that wearing a tiara has some scientific baring on psychiatric wellness. Sorry gals, I couldn't find anything.

I thought my sis might be able to find a term for it with her experience working in the psychiatric field.
"What would they call that?" I asked her.
"Grandiose?" she replied.
"No...there has to be some term for the way a certain thing can change the way we carry ourselves. Like wearing a great suit boosts your confidence in a big meeting."

I'm still not sure what you call it. I am for lack of scientific proof going to refer to it as The Tiara Effect.

I did learn that the sparky "Wow! I'm wearing a tiara!" feeling is triggered by the same part of the brain that we feel "fright or flight" from. Further digging led to a video describing how Navy Seals are taught to retrain the signals triggered by the Neo-Cortex part of our brain. The power of the mind never stops interesting me.

Having my eyes open wide for ideas to confirm my Tiara Effect Theory I read a blog post on the Positively Positive website by Jason Selk. It is a very good article about his experience being the Sports Psychologist for the St. Louis Rams and trying to turn their thinking around to a winning team. His article Advice On Looking Adversity Straight In the Eye was great. He explained how his approach to his mental game plan that week shifted when he began to see the team as undefeated. He described how different the mind works when looking from a vantage point of having already won. Confidence can be fostered by perceiving success.

This clicked with me. As Selk explained it was his "as if" approach that really turned things around. Act "as if" you already______________. You can fill in the blank. Ask and you shall receive times a dozen.

From a winner's vantage point the view is sweet isn't it? Mission accomplished... pageant queen waves...firm hand shakes after big deals made...hats off to you! You winner you!


(Scene from The Big Bang Theory)